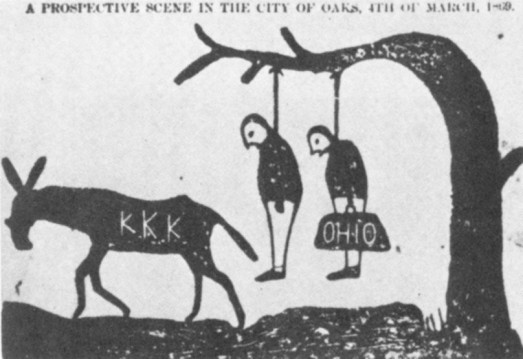 “Southern trees bear a strange fruit…” sang Billie Holiday almost a century ago. Which fruit is she referring to? Why does it seem to grow only in the South?

First we have to look back to the past: the abolishment of slavery and involuntary servitude in the US (with the Thirteenth Amendment to the Constitution) in no way led to the elimination of racism;
Some words  taken from a John Reed (a US political activist and journalist) speech can help us understand the problem:

“In America there live ten million Negroes who are concentrated mainly in the South. In recent years however many thousands of them have moved to the North. The Negroes in the North are employed in industry while in the South the majority are farm labourers or small farmers. The position of the Negroes is terrible, particularly in the Southern states. Paragraph 16 of the Constitution of the United States grants the Negroes full civil rights. Nevertheless most Southern states deny the Negroes these rights. In other states, where by law the Negroes possess the right to vote, they are killed if they dare to exercise this right. Negroes are not allowed to travel in the same railway carriages as whites, visit the same saloons and restaurants, or live in the same districts. There exist special, and worse, schools for Negroes and similarly special churches.” (The report goes on depicting the disheartening condition of the Afro-Americans…)

We can comprehend the reality of racial segregation, legitimated by the doctrine of “separate but equal”. As we can easily imagine, the second part of this formula was almost never taken into account.

To sum up, it was sadly easy to see a black man dangling from a tree. According to the Tuskegee Institute, in the years between 1889 and 1940 3.833 people were lynched;  90% of these murders took place in the South, and 80% of the “bodies swinging” were Afro-Americans.  Very often it wasn’t even necessary that the individual had committed a crime to lynch him: the only fact that he was black allowed the people to consider it as a “preventive action” in order to completely avoid the possibility that he could “become too much arrogant”.
Most of these crimes were promoted or directly carried out by the KKK (Ku Klux Klan): this organization still exists and during the years had seen periods of high notoriety (in the Twenties more than four million people joined it). Moreover, it is a duty to say that, according to a survey developed in the Southern States in 1939, almost six white citizens over ten were in favor of this macabre spectacle.

”Pastoral scene of the gallant south,

The bulging eyes and the twisted mouth,

Scent of magnolias, sweet and fresh,

Then the sudden smell of burning flesh.”

This jazz song, which goes straight to the point referring to merciless images, was not well understood at first, or in other situations some company refused to release it, because it represented a scandal. This due to the persistence of racism among huge sectors of the US population.

To conclude, although Holiday was the first artist to perform this single, the song was originally written by Abel Meeropol, a teacher who lived in Bronx, and it was firstly published on the communist newspaper New Masses.  This song shouted something that was not to say, it sounded as a strong action of denounce and protest. Therefore the very writer felt disappointed when Billie Holiday asserted to be the author, together with her pianist.